Canada’s housing market continues to show signs of stability as the number of homes sold so far this year has come in slightly higher than projected, a possible signal that the market is set for a rebound in 2014, according to the Canadian Real Estate Association.

The industry group representing Canadian realtors reported Monday that although it still expects fewer sales to be logged this year than in 2012, the decline will be smaller than what was predicted in March.

Overall, it forecasts that there will be more sales next year than in 2013 and 2012.

Douglas Porter, chief economist with BMO Capital Markets, said the figures show that the doom and gloom that has been anticipated for the Canadian housing sector looks like it’s been delayed — at least for the near future.

“Overall, this is relatively encouraging news,” he said. “If anything, the surprise has been how healthy the housing market has been.”

The group reported that sales activity began to pick up at the end of the first quarter and accelerated in the second quarter. It projects that 2014 will see a strong rebound, with 464,300 housing units sold — about 9,700 more than last year.

(Special) – Parents generally seem to be in a quandary about how to teach their children about money and investing, which is unfortunate because the sooner children can grasp the basic concepts the more likely they will be to establish good financial management practices as they mature and grow into adulthood.

“As busy parents we might not be well prepared to how best to talk to our young kids about the important of money, spending and saving as well as investing,” says Serge Pepin, vice president of investment strategy with BMO Asset Management.

“The younger you are in understanding the basic concepts of money and investing, the better you’ll be in securing sound financial well-being,” Pepin says. “It’s never too early or too late to teach children about money and take time as educators and as parents and/or guardians to explain key money concepts to them. It will help them succeed early on in the management of their first credit experience and help them establish good financial management as young adults.”

Many parents are still unsure about some of the basic money-learning concepts and activities such as when to start giving their children an allowance, how much to give them and should an allowance be tied to doing chores around the house.

“Some of the basic fundamentals are still a quandary to parents,” Alyson Shaefer, a psychotherapist and parenting expert, says. “They don’t really know where to start.”

To help with the challenge of educating children about money, BMO has partnered with the Canadian Foundation

An airliner prepares to land at Pearson International Airport in Toronto, September 30, 2004. If you’ve been procrastinating on plans for the family’s summer vacation, you’re going to need to move fast as rising airfares and packed flights have made it tough to find deals, but there are still a few tricks that could help, experts say.THE CANADIAN PRESS/Adrian Wyld

MONTREAL – If you’ve been procrastinating on plans for the family’s summer vacation, you’re going to need to move fast as rising airfares and packed flights have made it tough to find deals, but there are still a few tricks that could help, experts say.

Ticket prices are up one per cent for travel this summer — and that’s on top of last year when they were the highest in eight years, said Rick Seaney, CEO of U.S.-based travel website FareCompare.com.

There are several other factors working against late planners, including a number of mega airline mergers in the United States that have put a damper on price competition.

Airlines have also been cutting seat capacity over the last few years in the face of high fuel prices and a weak economy, leaving the industry with fuller planes and less incentive to offer great deals to customers.

“This summer people are going to be shopping for airfares and getting some sticker shock in certain cases,” Seaney said in an interview from Dallas.

But he remained optimistic that strategic

(Special) – Canadian households are continuing to pile up debt. A recent Statistics Canada report calculated that the average household in Canada owed a record $164.97 in debt for every $100 of disposable, after-tax income earned in the fourth quarter of 2012, up slightly from the previous high of $164.70 in the prior three months.

While most people would agree that debt can be very dangerous if it gets out of control, it is a fact of life which, if approached prudently, does not necessarily have to be bad.

Canadians need to access credit and borrow money to pay for things they need. One of the main principles of money management is to borrow for things like a house which, over time, are likely to increase in value.

In other words, there is good debt and bad debt.

Good debt includes anything that is too expensive to pay cash for but is something that you need or might be considered a good investment, such as a house. Bad debt is any form of debt with a high interest rate for things you don’t really need or can’t afford, such as charging an expensive vacation on a credit card.

The worst form of bad debt is credit card debt because it carries the highest interest rate. It becomes particularly bad when consumers are unable to cover the monthly card payments and continue to add to the balance.

U.S. batch futures forked to a neatly reduce opening Monday as a SP and a Dow Jones Industrial Average came off one of their misfortune weeks of a year.

Analysts pronounced that Monday’s forbidding marketplace mood is partial Federal Reserve and partial China following a warning from a People’s Bank of China (PBOC) that banks there indispensable to do a improved pursuit of handling their money and lending.

This batch downturn could be a start of another summer swoon, Doll pronounced in a “Squawk Box” interview. But, he added, “absent a bad economy—which we got [in] those progressing summers when we had a double number commission declines—I don’t consider this decrease will be this big.”

“Pauses are normal. We got so used to a batch marketplace kind of going adult roughly everyday. There was a prolonged duration when we didn’t have dual down days in a row,” Doll said. “So we consider we’ve gotten marred and complacent.” It’s going

Commenting on a marketplace turmoil triggered by Fed chair Ben Bernanke’s vigilance that a bank could start tapering a $85-billion monthly bond purchases before a finish of this year, Mr Fisher told a FT: “My personal feeling is that we don’t travel adult to a lion and flinch.”

He likened a marketplace greeting to a 1992 conflict led by financier George Soros on a Bank of England, that led to a UK crashing out of a European sell rate mechanism.

“Markets tend to exam things,” Mr Fisher said. “We haven’t lost what happened to a Bank of England [on Black Wednesday]. we don’t consider anyone can mangle a Fed . . . . But we do trust that large income does classify itself rather like untamed hogs. If they detect a debility or a bad scent, they’ll go after it.”

Mr Bernanke’s comments have rattled investors and carried a 10-year Treasury yield—the tellurian benchmark for borrowing costs—to a arise of 2.66 per cent early in New York on Monday, fluctuating a fast arise from a low of 2.10 per cent a week ago. The SP 500 index of heading U.S. bonds fell

Wall Street never suspicion it would be this bad.

Over a final dual months, and quite over a final dual weeks, investors have been exiting their bond investments with astonishing ferocity, moves that continued by Monday.

A bond sell-off has been approaching for years, given a prolonged run of recognition that corporate and supervision holds have enjoyed. But many strategists approaching that investors would solemnly send out of bonds, permitting seductiveness rates to solemnly deposit up.

Instead, given a Federal Reserve chairman, Ben S. Bernanke, recently suggested that a strength of a mercantile liberation competence concede a Fed to delayed down a bond-buying program, waves of offered have convulsed a markets.

The new pain has spilled over into batch markets, pulling a Standard Poor’s 500-stock index down an additional 1.2 percent on Monday. But a genuine vigour has been felt in a bigger and some-more closely watched bond market. The value of superb United States supervision 10-year records has depressed 10 percent given a high in early May.

The offered has been many manifest among sell investors, who have sole a record $48 billion value of shares in bond mutual supports so distant in June, according to a information association TrimTabs. But sidestep supports and other large institutional investors have also been shutting out positions or stepping behind from a bond market.

The Shanghai Composite Index finished 0.2 percent reduce Tuesday on hopes of involvement by a executive bank, though not before plunging as most as 5.7 percent progressing in a session.

After a marketplace close, a China executive bank sought to encourage markets, observant that a anniversary factors heading to parsimonious liquidity will fade and that a bank will beam marketplace rates to reasonable levels.

Despite a reassurance, marketplace strategists contend a destruction for a market, that has depressed roughly 20 percent given a rise in mid-February and now trade during a lowest turn in 4 years, isn’t going to stop here.

(Read More: It Is Now a China Bear’s Turn to Maul Markets)

“There will be serve downside risks in a short-term, since a supervision is not expected to palliate liquidity constraints. It’s going to shorten credit growth. They wish to send a really clever summary to a tiny and middle banks to conduct their liquidity,” pronounced Kelvin Tay, informal arch investment officer, Southern Asia-Pacific during UBS Wealth Management.

Tay forecasts another 5-8 percent downside in a Shanghai Composite from stream levels in a entrance days.

Domestic investors – that comment for around 80 percent of marketplace turnover, have been heading a offered in stocks, according to marketplace watchers.

In a midst of marketplace sensitivity on concerns over Federal Reserve tapering, a accumulation of item classes have sole off too most and could benefaction a near-term investment opportunity, scandalous bear Marc Faber told CNBC.

“Treasury bonds, gold and equity markets are oversold in a near-term and they can miscarry for a subsequent 10 days or even a subsequent month,” Faber, a author of “The Gloom, Boom Doom Report,” pronounced on Tuesday.

But over that, he said, “The best march of movement is to indeed not buy anything, though rather to revoke positions on a rebound.”

(Read More: What’s Behind a Emerging Markets and China Selloff) 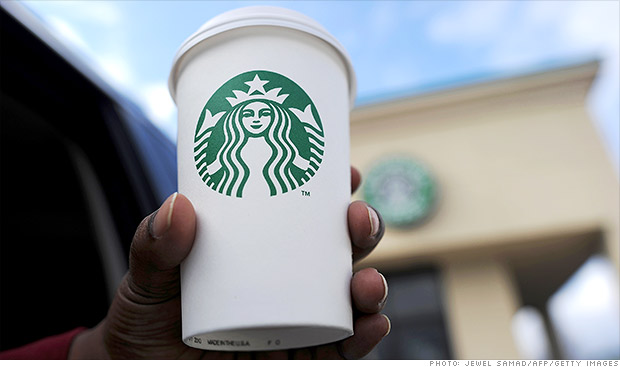 Starbucks is lifting a cost of a smaller drinks about a dime as of Tuesday.

Starbucks is charging business a small some-more to assistance them get adult Tuesday morning, as a coffee sequence raises a prices of many of a drinks.

Prices are going adult by an normal of 1% on brewed coffee, tea, latte and espresso drinks, orator Jim Olson told CNNMoney final week. While splash prices change from city to city, Olson pronounced a travel will boost a cost of a high brewed coffee by about a dime.

Less than one-third of all Starbucks (SBUX, Fortune 500) beverages will be influenced by a new prices, he added.

For instance, prices will not boost for a incomparable venti and grande-sized brewed coffees, or for a Frappuccino drinks. 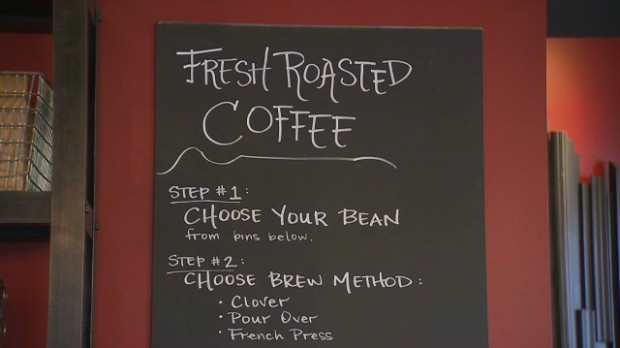 Olson pronounced this is a initial cost boost in scarcely dual years for a coffee chain, blaming a rising cost of labor, tender materials and lease for a hike.